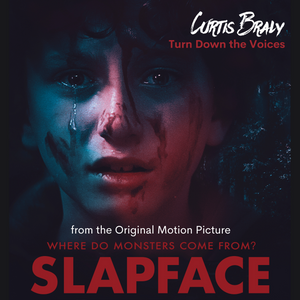 Rising country artist Curtis Braly recently announced the release of his new single included in the original motion picture soundtrack of ‘Slapface’ the movie. “Turn Down the Voices” arrives on Friday (Feb. 4), one day after the movie premieres exclusively on AMC Networks’ Shudder, the only premium streaming service for both casual and super fans of thrillers, suspense, and horror.

Slapface, which won the Best Audience Award for Best Horror/Thriller/Sci-Fi Film at the Cinequest Film Festival in 2021, was written and directed by Jeremiah Kipp (Black Wake; 60 Seconds to Die "Monster"; The Sadist; The Pod).

A first for Curtis Braly - both appearing on screen and writing music for film - Curtis expressed his excitement about the notable addition to his resume.

“I am so thrilled to have had the opportunity to not only share the screen with talented and well-accomplished actors like August Maturo (Girl Meets World, The Nun), Mike Manning (Teen Wolf, Days of our Lives, The Bay), Dan Hedaya (The Addams Family, Clueless, The First Wives Club), and Libe Barer (Sneaky Pete, Parenthood) but to also write music for the film. It was a fun challenge to dig deep inside myself to co-write and record a song that is so outside the box of anything I’ve done before,” Braly said.

“Turn Down the Voices”, a song both co-written and performed by Braly, can be found in the bar scene of the film as well as setting the haunting tone as the film’s end credits roll.

Curtis has repeatedly expressed his gratitude towards the film’s stellar cast & crew for their patience, compassion, and on-set coaching as he made his film set debut.

“Curtis Braly was such a joy to work with on Slapface," shares Director Jeremiah Kipp. "He had to convey a no-nonsense calm strength in the role of the nurse, and push back against lead actor Mike Manning's edgy character while maintaining a sense of health care professionalism."

"When we filmed with Curtis it reminded me that country singers are natural-born storytellers (like Reba McEntire and Kris Kristofferson)," Kipp continued. "That became especially true in his end credits song "Turn Down the Voices" where he essentially had to perform a track that could be from the point of view of our main character. The effect was haunting, unsettling, emotional as Curtis leaned into the dark subtext of our narrative. When we heard his final version, chills ran down my spine.”

With almost a half-million Spotify streams alone, Curtis’ music offers a breath of fresh air to the country music world and now to the pop world. He is currently working on more new music, new stage shows, and other exciting new projects to come in 2022.

Stream “Turn Down the Voices” here.